I took the opportunity last week to travel to the north of England and visit a contractor who has now been running a Sands Horizon sprayer fitted with an Ag Leader® Integra and DirectCommand™ ISOBUS liquid control for about a year now. My intention was to talk to him about his experience with Ag Leader over the last year but if I were to be completely honest, the conversation went way beyond just Ag Leader!

Hangin’ On, the title of this blog, is David’s one liner when asked how things are. So much so that the girls at the local bank made him a couple of hats with this exact phrase on it. Of course, this particular rhetoric to an age old question is often accompanied by a wry smile.

David Garbutt has seen more than most. He hails from a hill farm in the dales where life was tough, and still is. But he has been at his current location in Cleveland, North Yorks for 51 years and has been contracting for about 30 of those years. Spraying has been the backbone of the business for most of that time but he also does other work with tractors such as cultivations and drilling.

From his home base of Spyknave Hill Farm, he works an approximate 25 mile radius covering some 12,000ha (30,000ac) per year. Bear in mind this is total accumulated area not total farmed area!

He has been running other machines during the last 30 years but about one year ago, he swapped to a Sands Horizon SP sprayer fitted with a 36m boom and 5500l tank. Ag Leader comes standard in these machines so of course it came with the Ag Leader® Integra display and DirectCommand™ ISOBUS liquid control, but this was David’s first Sands machine to be fitted with the ISOBUS liquid control as opposed to the legacy DirectCommand™ system. He usually keeps the machines for 3 years and expects to accumulate about 2000hrs per year. 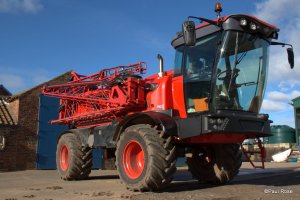 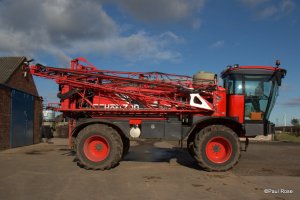 I did ask him about the Ag Leader system and his thoughts about it. The answer was clear and simple: “Absolutely marvellous!” It has been almost flawless and does what he wants. It is easy to use, reliable and support has been there when needed (both for the sprayer and Ag Leader).

He is the only one who runs the sprayer and he is helped by one other casual labourer when needed. The sprayer is fed by a 15000l bowser pulled by one of his larger tractors. 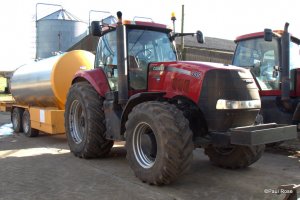 So when the busy season hits, he is often working 16hrs per day, 7 days per week. This year will be particularly interesting due to the weather over the last few months that has seen 800mm of rain and is still wet. When the wet spell does break, he will be running hard hence reliability is of utmost importance.

I should also add that on top of a busy contracting business, he also farms 200ha (500ac)!

So if you are looking for cutting edge technology that is easy to use and reliable ever under extreme pressure then no need to look any further than Ag Leader!

I would like to take this opportunity to thank David for his time and wish him luck for the coming years with the business. Keep “Hangin’ On!”. 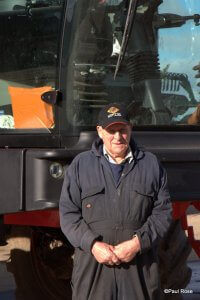