This blog is the final installment of a short series on Ag Leader OptRx® crop sensors. Part 1 touched on the returns and savings an Ohio grower saw with OptRx and this segment will discuss how OptRx is being practically implemented on a southwest Iowa farm.

I hope you find Bill and Paul’s peer perspective refreshing – they’re both Ag Leader dealers, yes. But they are also progressive farm managers with years of plant/nitrogen experience. Read on to see how Paul uses OptRx and side-dressing to reduce nitrogen costs and effectively fertilize his crops when they need it the most – in season.

Paul Boyle can remember a time when sidedressing corn was relatively common. Growing up he remembers his dad sidedressing on the family farm. Other farmers in the area did it, too. Then things changed.

“As farms got bigger, farming practices changed and people went away from sidedressing because of the extra time it takes to do it,” said Boyle, who farms near Correctionville, Iowa, and also sells precision ag products through his company, Boyle Precision Agriculture.

Sidedressing has become, in his opinion, somewhat of a novel management practice, which Boyle can’t quite understand. As a farmer and business owner, he knows money talks, and he said there’s a lot of money farmers are leaving on the table when it comes to fertilizer application. 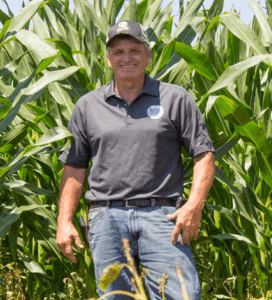 But if you’re willing to invest a little up front to get the right equipment, like the OptRx for instance, and you’re not afraid to go out in the summer and work a few days, you’ll see the ends justify the means. — Paul Boyle

Sidedress for “Some fertilizer companies tell you that you should put as much fertilizer on as you can,” Boyle said. “And farmers mostly take the four-by-four approach: four weeks in the spring, four weeks in the fall. But people don’t eat for four weeks and live the rest of the year off it, nor do livestock. So why do we treat our crops that way?”

Boyle does, however, understand the reasoning behind this approach. Many farmers, he said, prefer to get their fertilizer application done all at once so they don’t have to worry about it for a while. But he sees a major flaw to this approach. 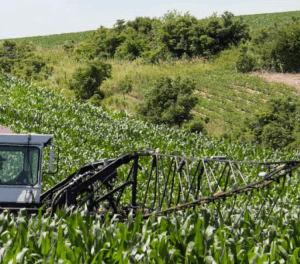 “When do you see most of the fertilizer going on?” Boyle said. “Either early spring or late fall. When do we see most of our rain Throughout all of spring. Well, you can’t expect the fertilizer to stay on the field, especially if you get a good three to four inches of rain. When this happens nitrates will run off, which impacts your margins as well as the environment and water quality.”
On his own farm, Boyle applies 80 pounds per acre up front, and then comes back in the summer and sidedresses another 40 or so pounds of Urea dry fertilizer. Using an Ag Leader display and OptRx Crop Sensors allows him to apply only what the plants need, helping to boost his margins.

“In the spring, the price of nitrogen is a lot higher than it is in the summer,” Boyle said. “So not only are we putting less of it on, but we’re purchasing it at a far better price. So we’re saving quite a bit of money on nitrogen costs. When you tally up the savings on inputs, your precision tools will pay for themselves. The math is really easy.”

And yet, last year none of Boyle’s customers were doing sidedressing. This past year, he shared with them how he went about variable rate application and sidedressing. For Boyle, sidedressing helped balance the cost of inputs and enabled him to meet his increased yield goals. After considering the potential saving themselves, four customers made the switch this year, and Boyle believes it’s only a matter of time before sidedressing becomes the norm on most farming operations. 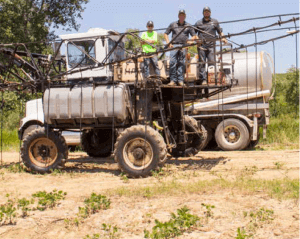 “The main drawback to sidedressing is that it’s one more management thing to do,” Boyle said. “Some guys prefer to spray and plant in the spring and not have to go out to the field again until harvest. That’s fine if it works on their farm. “But if you’re willing to invest a little up front to get the right equipment, like the OptRx for instance, and you’re not afraid to go out in the summer and work a few days, you’ll see the ends justify the means.”
Read Paul’s story and learn more about OptRx in the Summer 2016 edition of Insights, found here.
Share This