See all the Great Features of the ISOBUS Liquid Module

Released in North America earlier this year, the ISOBUS liquid module is already realizing great success in the precision application market. The module was tested over several thousand acres in 2013, sold in markets outside of the US for 2014 and first sold here in February.

The ISOBUS liquid module brings a host of excellent features for the agro-chemical and fertilizer applicator. In addition, it can be operated by any Virtual Terminal display. That’s right – use your Ag Leader® Integra, Versa, Compass or John Deere 2630, Case Pro700, Topcon X30, AGCO C1000, etc. to get Ag Leader’s legendary product control and enhanced user experience.

Some highlighted features of the ISOBUS liquid module are:
– Pressure and flow based product control
– System can use flow based control for higher rates, then automatically switch to pressure based for optimum control at lower rates
– Up to 24 sections of boom control support
– Boom Prime – Enter desired pressure and it will prime to the desired psi. Which also can be used to specify Standby Pressure (Hold)
• Droplet Size Monitoring
– Define your nozzle specs and get droplet monitoring on the go
– Store up to 50 user-defined and ISO nozzles in the system, including 11 pre-set ISO nozzles

• Minimum pressure support – user defined pressure point the system will hold in order to maintain a minimum pressure. This setting will allow the control valve to react from a hold state much faster.

Although the ISO 11783 protocol defines how a Virtual Terminal can appear, Ag Leader engineers maximized the resolution to where the liquid module’s ECU displays as one of the best looking object pools in the industry. Of course there’s also the intuitive user experience and simplified calibrations steps, too. 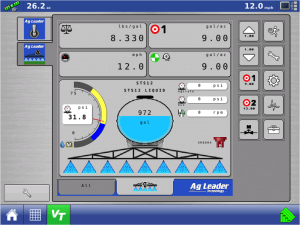 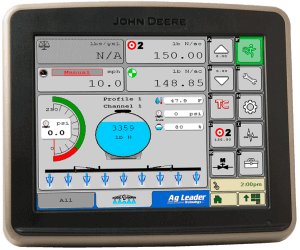 For more information on the ISOBUS Liquid Module, click here.

All other marks are owned by their respective companies.