Where in the World is the Yield Monitor 2000?

Now it’s time to play Where in the World is the Yield Monitor 2000?, where you will use the clues below to guess where you can find the most unique new home for Ag Leader’s inaugural product. 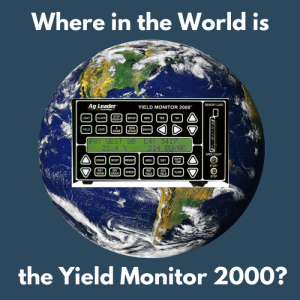 Clue #1: The Yield Monitor 2000 may have been born in the Midwest, but it’s capitol-izing on its new home.

Clue #2: We commonly refer to the Yield Monitor 2000’s predecessors as displays, but this type of display is much more of an exhibit.

Clue #4: People travel from far and wide to tour this historic gallery. You might say it is the top institution of its kind.

Still stumped? If you can’t put it together after Clue #5, you need to return to high school history class.

Clue #5: This locale is named after British scientist and philanthropist, James Smithson. Another of his namesakes is the mineral, smithsonite.

Hopefully you will put the clues together, but if not, check out this link for more information.