InCommand and AgFiniti make up the foundation of technology required to start connecting every field operation on a farm. This powerful duo seamlessly flows information across displays, smartphones and tablets in real-time and even to field operations in different seasons. 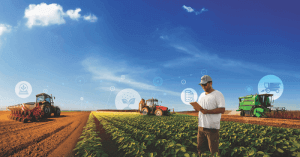 With those building blocks in place, it’s time to define your goal. At times like planting and harvest, some farmers have multiple machines in the field at once, and there’s value in building connectivity among those machines for seamless field operations. Others want to connect all field operations from planting to harvest in an effort to inform every offseason planning decision.

Many of Dean Walker’s customers are in the former camp. He’s a certified crop adviser and director of precision services at The McGregor Company in Colfax, Washington. His customers are primarily wheat and small grain farmers in the Palouse region of eastern Washington that range widely in size. Many operate multiple machines in the field at times like planting and harvest, and AgFiniti connectivity helps provide efficiency and structure to jobs that previously lacked it 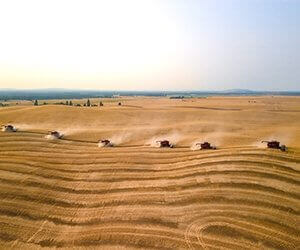 “When I think about the farmers planting or spraying with four machines in the field at once, I think about how disconnected it used to be. They would descend upon a field and everything would be going well until the end, then it would slow to a crawl because nothing was connected,” Walker said. “AgFiniti provides exponentially more efficiency.”

On Ryan Raugust’s wheat and small grains operation near Pullman, Washington, fields are large. With multiple combines in the field at once, connectivity and real-time data logging among the operators of those machines are hugely important to overall operational efficiency.

“Before Ag Leader, there were no programs out there that could connect multiple machines in the same field,” said Raugust, who uses InCommand displays in multiple combines, planters, and tractors. “When you are running four drills when planting in the same field, you need to be able to see where the other operators have been, and when we’re spraying, we need to see where others have already sprayed. AgFiniti helps link all those operations together. It’s incredible.” 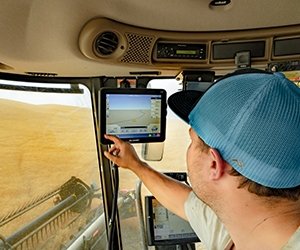 The farmers Mike Reed works with in eastern Indiana have different needs. His region’s row crop farms are not as large, acreage-wise, but connectivity is just as important. The Ag Leader technician with Harvest Land Co-op in Richmond, Indiana, says the same combination of hardware Walker’s customers use 2,100 miles away has powerful functions for his area’s farmers, only to a slightly different end.

“One customer had a specific end goal of connecting all of his field operations, and he’s able to do that now, especially with AgFiniti giving him access to all his data all the time. AgFiniti puts it right at his fingertips,” Reed said. “His goal was to have all of his data available among displays in all of his machinery, so whether he’s planting, fertilizing, spraying or harvesting, he can be able to see what’s been done from the same major data source. It’s a good fit for him to add connectivity to all of the machines he’s running so he can keep track of everything through the course of the crop year.”

Though he recognizes the level of connectivity AgFiniti provides can be a “major step up” for some farmers, Walker said once his customers see what the real-time data can mean to their crop decision-making abilities, they typically see the value it represents in fairly short order.

“It’s like when we got our first microwave. Once you have something like that, I could go back to the old way of cooking, but I just don’t want to do it,” he said. “Once you get used to this kind of connectivity and that data starts showing up in the cab, in real-time, it’s hard to operate without it. It becomes a value point to the farmer.”