Don’t Go Through Another Planting Season Without Hydraulic Down Force

The Hydraulic Down Force system is centered on the unique hydraulic actuator. One very important feature of the actuator is the patented nitrogen accumulator. The accumulator is the large shaped piece on the upper portion of the actuator (See Figure 1). When a row unit needs to make a rapid upward adjustment due to terrain changes and obstacles, the accumulator allows for this instantaneous movement and absorbs the pressure increase. Without an accumulator, the row unit is not allowed its natural movement and could result in damage versus a hydraulic system that did not have this feature. 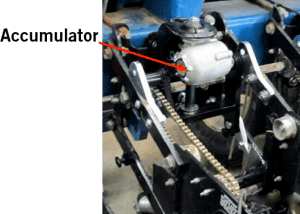 Ag Leader Hydraulic Down Force does not require the user to enter a target down force setting or margin (some initial planter specific settings required). The Ag Leader Integra display is able to use data from Gauge Wheel Sensors installed on several rows across the planter to determine optimal down force to achieve the desired planting depth while limiting compaction. Major pressure adjustments can be made in as quickly as one second, making it substantially quicker than any air bag down force system on the market. In addition, there are fine-tuning adjustments that can be made per channel on the go by the operator. The default setting will provide ideal control for a large majority of growers. Although in field conditions where compaction is a major concern, or where the field conditions require extra gauge wheel load to break up clods, quick and easy adjustments can be made right at the operator’s fingertips. 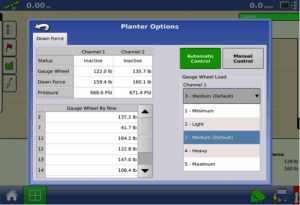 For further customization of the system, Hydraulic Down Force can be controlled in two channels; one channel controlling the middle rows of the planter directly under the bulk seed tank and behind the tractor, and the second channel controlling the outer wings of the planter. Tests have shown that the compaction left by the tractor and bulk seed tanks result in the row units in this zone requiring 100-200 lbs extra down force versus the row units on the wings of the planter. 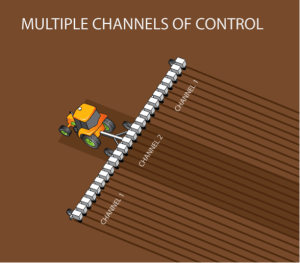 One of the first results typically seen when using this system is the uniform plant emergence where the field conditions or soil types are highly variable. Going from a soft, sandy soil type to hard clay areas of a field can negatively affect the planting depth. Down force springs cannot account for this without a manual change, and an active control air bag system can take up to 15-20 seconds to fully adjust for this variance. The ability to quickly and accurately adjust the down force in these scenarios gives the planted seed a chance to yield to its full potential. If the seed is planted at the incorrect depth or into a compacted trench, yield potential is compromised before the seed even starts to grow.

With a successful first planting season behind us, growers that utilized Hydraulic Down Force saw how this fast, reliable and accurate down force method is them giving improved crop stands and yields.

“I was very pleased with the even emergence as a result of the Ag Leader Down Force System that I purchased from my dealer. With the wet spring we had, we tended to run the system on a “light” Down Force setting.  On our 3700 Kinze 24 row, 20 inch planter, as the seed boxes emptied we would see “Inadequate Down Force Alarms” show up.  This is a big problem on planters with individual row seed boxes. Before, with down pressure springs, there was no way of knowing if we had too much or too little down force as the weight of the seed boxes changed. I’m convinced the system paid for itself this year alone.  I’m looking forward to using it in a “normal” spring!  The Ag Leader Team is superb; they have been there to talk us through issues and always answer their phone calls.” Glenn Griffin – NE Iowa

For further information about Hydraulic Down Force, contact your local Ag Leader dealer or call Technical Support at 515-232-5363.