Hit the Spring Planting Target with Hydraulic Down Force

Will Hutchinson enjoys a good challenge, especially when it comes to improving production on his row crop, wheat and alfalfa farm near Murfreesboro, Tennessee.

So when he saw the opportunity to leverage Ag Leader’s Hydraulic Down Force system to prevent a common problem and improve his planting operations on acres where he plants cover crops, he jumped at the chance. Two years later, he’s seeing major corn yield improvements as a result. 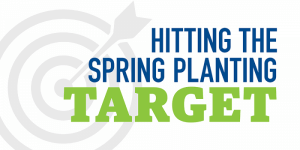 Why Hydraulic Down Pressure?

Topsoils are relatively thin in south-central Tennessee, and Hutchinson says during the growing season he’s always just “10 days away from a drought.” Any departure from normal seasonal moisture – either too wet or too dry – could be devastating to his crops. To help better conserve and manage available moisture, he began integrating cover crops into his no-till rotation five years ago. Today, he plants a mixture of triticale, oats, vetch, peas and occasionally rye, radishes or other brassicas. Though he’s still fine-tuning his rotation, Hutchinson says he’s learning more about cover crops over time, and his soils are benefiting and helping to sustain and improve his rotational crop yields.

But during spring corn and soybean planting season, his cover crops’ ability to maintain steady soil surface moisture isn’t always Hutchinson’s friend. Especially in years like 2017 – when cool, wet conditions stretched the planting timeframe beyond most farmers’ comfort zones – excessive spring moisture becomes a bigger problem than normal in the presence of a healthy cover crop. The more plant matter, both above and below the soil, the more moisture is retained, and that can mean either delays or planting into conditions that are far from optimal, resulting in a crop whose development is hamstrung from day-one.

“Those cover crops soak water up like a sponge. That can mean a lot of moisture remains on the surface in the field,” Hutchinson says. “The resulting wetter conditions can knock us out of our normal planting window if it stays wet for too long.”

That’s why Hutchinson started to explore increasing planter downforce as a way to plant corn in damp conditions, especially in his fields with cover crops. Typically, heavier downforce in damp conditions would create undesirable soil compaction, but in Hutchinson’s unique situation, planting through a thick, green cover crop requires greater force to get the seed through the biomass and into the soil.
He describes himself as purpose-driven, deliberate and thorough when it comes to technology on his farm, and far from the most “cutting edge” farmer. For him, integrating Ag Leader’s Hydraulic Down Force system was all about function, not new technology.

“We knew we’d be planting in wet soil conditions, and really thought precise control of down pressure would have good potential to pay off. That’s what compelled us to give it a try,” he says.

After researching the marketplace, Hutchinson found Ag Leader’s ISOBUS-compatible Hydraulic Down Force system to be the best fit for his operation, both in terms of the product’s performance and the support he received in integrating it into his planting operations.

“We were using a different system before, but I was only able to apply so many pounds of down pressure to the planter gauge wheels. Ag Leader’s Hydraulic Down Force was able to apply about 30 percent more, so that was part of our big push to use this system,” Hutchinson says. “The system was simple and highly functional, and we really like Ag Leader’s service.”

Hydraulic Down Force’s mettle was tested in the spring of 2017 when Hutchinson said he faced wetter-than-normal conditions. Without the system, he said he would have been kept out of the field completely. Instead, he was able to plant his crop in the ground and start off at the right time.

“This spring was extremely soggy, but with the combination of the cover crops and hydraulic downforce, we were out planting in a lot of no-till fields when other guys were sitting,” Hutchinson says. “Given the grain markets we’re facing today, it’s important to hit these timeframes, and Hydraulic Down Force was the right technology to help us do just that.” 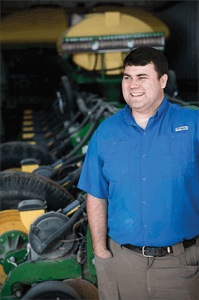 How did it perform? Though it’s just one critical piece of the puzzle, Hutchinson says it contributed to corn yields around 20 percent higher than his farm’s previous five-year annual production history. And from an operational standpoint, it enabled him to devote attention to different aspects of his farm business at a critical time of the year.

“Early on, it was like a new toy to me, and I wanted to watch it and see how we were doing all the time. But, there’s really nothing to pay attention to with it. You set it and it operates from there,” he says. “I know it’s doing what it is supposed to be doing, and it allows me to concentrate on more issue-prone parts of planting. There are very few things that are truly ‘set it and forget it,’ but this one is pretty close.”

And as the season progressed, he noticed the absence of a common, sometimes costly problem. “Sidewall compaction was not what I normally would expect. It’s really a combination of practices, cover crops and more precise downforce. I would say this Hydraulic Down Force system goes a long way toward minimizing sidewall compaction,” Hutchinson adds.

Integrating the system into his planter did require some work. Because he’s a no-till farmer, Hutchinson says his soils are “extremely tight” and planting requires a lot of downforce, meaning he had to add length to his planter toolbar to “give it something to push against.” Ultimately, he removed the no-till coulter from the planter after adding necessary weight. While that combination is admittedly hard on his planter’s disk openers, replacing them each year is a small price to pay for the benefits to planting and early emergence the system provides.

“Our stand has just been fantastic. I think it’s a combination of the Hydraulic Down Force system and these other small adjustments,” Hutchinson says. “We also added spiked closing wheels, and they really helped a lot.”

Looking ahead, Hutchinson says he’ll continue to refine his cover crop rotation to maximize the benefits of the system to his soil health and quality. One constant factor will be his continued use of Hydraulic Down Force. He expects the system’s return on investment will grow stronger in the long run, especially if he’s able to integrate it into more than one planter.

“I feel confident that we can expect really positive ROI benefits on the system, especially if we can have it on two planters. Managing our planting time window is the biggest benefit now, but I feel confident that it will definitely continue to pay off when we face challenging spring planting conditions like we had this spring,” Hutchinson says. “It’s a really good product, and I’d buy it again in a heartbeat.”