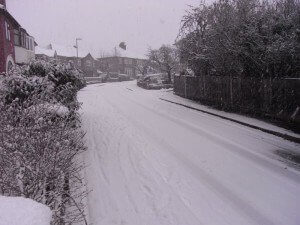 It is not normal (from a weather perspective at least) that I wish I was in Iowa! However, given the recent weather and temperatures here in the UK, Iowa has proven to be worthy of consideration as a destination to warm up a little! With temperatures down to -13°C (9°F) (according to my car at least) and several cm’s of snow, we have experienced some of the worst weather in decades. Airports, motorways and even some essential services have ground to a halt, which brings me to my first comment.

I was at the Ag Leader Dealer Meeting in 2009 – which was when Ag Leader Academy was officially opened – and overnight there was about 45cm’s (18”) of snow that fell, and the temperatures were none too warm either! But whereas in the UK that type of weather would pretty much shut the country down, the Iowans just kept going and the meetings went ahead as planned. This was despite having to dig through snow drifts 1-2m (3-6ft) deep and the task of clearing roads, but nonetheless people appeared to go about their daily business as normal. To be fair to the UK, we do not expect weather like this to occur very often and therefore don’t have the provisions in place to deal with it, whereas Iowa and other places around the world can pretty much set their clocks by when the snowfall comes and are therefore used to it and can plan for it. But this also brings me to my point for this blog: Being Prepared.

It is not always easy to be prepared for the unexpected, but there are still a lot of things that we do expect and can prepare for. Snow and sub zero temperatures in Iowa is one of them (though I am not sure I’ll ever get used to it!). But whilst most fields are not accessible during this time, there is still plenty to be getting on with in preparation for next spring, which will inevitably arrive next year. And sooner than you think:

But most importantly, this is the time of year when we most definitely should be planning to spend time with family and friends. And whilst we are on the subject of Christmas and the New Year, let’s not forget those that are less fortunate than ourselves; it is also the time of year for giving. Merry Christmas!