I have recently returned from my annual trip to South Africa, which as some of you now know is one of my favourite places to visit!
The annual NAMPO Harvest Day was held again in May and was bigger and better than ever! It has grown each year since my first trip in 2007, and this year as no exception. Visitor numbers were up and the sun shone! 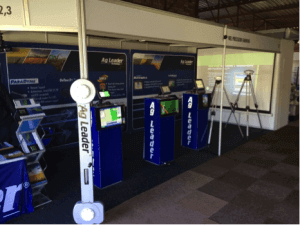 The NAMPO show was very successful for Ag Leader and distributor, Nel Precision Precision Farming (NPF), and there were plenty of visitors and potential customers for the future.

As part of my trip to South Africa this year, I visited a customer in Caledon, Western Cape. Tonie Linde farms 2700ha in this area, of which 1700ha is cropped with wheat, barley, oats, canola and lupines. He also grazes 5500 ewes from which 2750 are Merino’s and the rest are Dohne Merino’s . The farm is managed by Willie Beukes and it he that I spoke with. During my all too short visit, they were coming to the end of drilling wheat and only had one field left. Equipment used was a JD 8530 with OnTrac2+, Ag Leader Integra display and strip till module controlling a 14,4m Equaliser Airseeder seeding wheat and 2 x fertiliser. Willie is no stranger to Ag Leader equipment and this is the second season for this particular set up, but it has been used on previous machines for the last 3 years. He also has 2 Versa displays that are fitted to the selfpropelled sprayer and and the tractor that does the fertilizer spreading. Then during harvest season these two Versa displays move to the JD 9770 harvesters to do yield monitoring. He was very happy with how the system worked and commented on how easy the display is to use and set up. 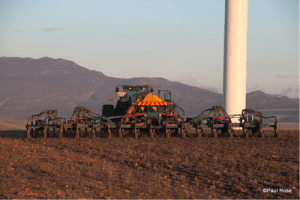 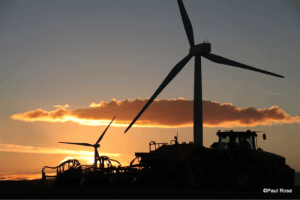 Drilling wheat as the sun sets in South Africa.

One of the things that struck me during my visit was the soil in which they were drilling the wheat. Seemed to me that there were more rocks than soil, but they would still expect a yield of 3-3,5t/ha on this field. Farm average last year was just over 3.8t/ha and the previous year 5t/ha. Whilst weather is one of the most important factors here that can make or break a crop, one of the others is grass weeds. Down here they are very difficult to control and can use valuable moisture during the growing season, thus robbing the productive crop and lowering yield. 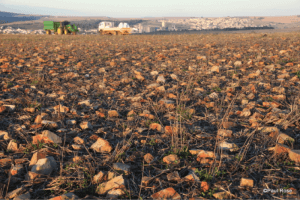 Tough conditions for any drill!

This is where the Equalizer min-till airseeder helps the farmers alot. They help to protect the moisture in the soil and help to reduce the grass weeds problem. According to Tonie, with the airseeders they manage to harvest crop with good yields from these rocky fields. Where in the past they struggle to harvest anything from those fields.

Tonie was named South Africas Barley producer of the year for the 2012-2013 harvest year. 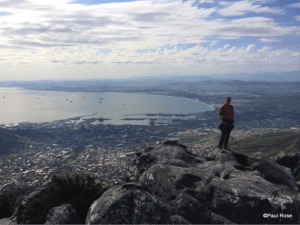 Of course, a trip to Cape Town would not be the same without a short trip up Table Mountain!