NTRIP/CORS: How it works and what is involved

Does GPS lingo leave you scratching your head?

We’ll help you gain some clarity, as we explain NTRIP/CORS networks.

NTRIP, CORS and VRS are different things. However, the terms are often used synonymously in our industry.

NTRIP (Network Transport of RTCM via Internet Protocol) and CORS (Continuously Operating Reference Station) are forms of RTK differential correction that are done using a cellular modem and base station network. This means that instead of using the traditional base station and radio to send correction data to a rover, data is sent using the internet to a cellular modem with a data plan. VRS (Virtual Reference Station) is simply a method of RTK correction that will be explained in detail later.

In order to use this type of correction you must have a cellular modem, a receiver capable of RTK correction and a cellular data plan. You are also required to register with your local NTRIP provider. This will include creating a username and password as well as obtaining a port and IP address for the cell modem to access the network.

NTRIP networks are growing in size and capability. Some networks are operated by the state, free of charge, while others are privately operated and can require a subscription fee. Networks are also adding support for the newest GPS constellations, including Galileo (Europe’s network) and will continue to add support as other constellations come online.

The NTRIP system is made up of three primary software components: caster, server base and client rover.

The NTRIP caster is an HTTP Internet service, acting as a line of communication which carries GRSS connection data between NTRIP server and NTRIP clients.

The NTRIP client rover makes real-time corrections based off-of the GNSS data, or RTK positioning received through the internet using single reference stations which are also known as RTK networks. Additionally, it sends request messages to the caster in order to receive data. 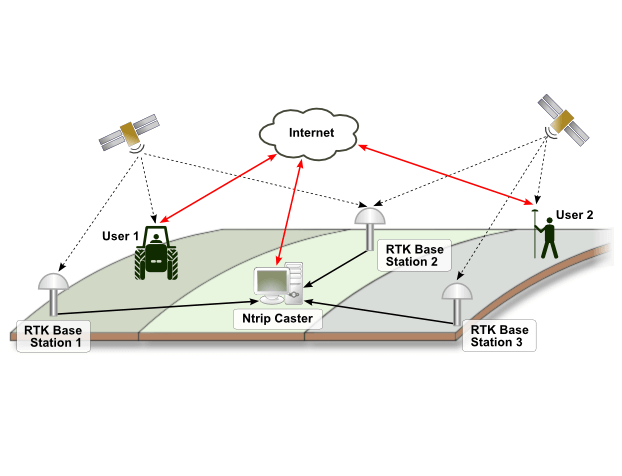 There are four formats supported by NTRIP/CORS: CMR, CMR+, RTCM 2.x and RTCM 3.x. There are five supported NTRIP streams:  Near, Max, iMax, Single and VRS.

When using iMax, the receiver periodically sends out its location to the network where the solution is generated and sent back to the rover. Single base is a solution allowed on some networks that lets you choose a specific base station as opposed to having the network choose a base or network of base stations for you. VRS or Virtual Reference Solution requires the rover to send a latitude and longitude position to the VRS network; the network then creates a virtual base close to the rover that is used for correction. There is a network of reference stations that receive information from the GPS network, they communicate through a server and finally a single base sends position information to the rover where the information is corrected.

One of the benefits to using NTRIP is the capability of achieving sub-inch RTK accuracies without having to purchase and manage a base station yourself. RTK accuracy allows for a level of repeatability that cannot be achieved through most other types of correction. There are many states that have networks.

The map below shows Minnesota’s network. The base stations are spread generally even to allow for coverage in most areas.

Now that your head is swirling with information, read on to find out about our handy tools that provide seamless connectivity!

Ag Leader offers an internet connected InCommand® display which supports easy connection to NTRIP networks. This is an option that does not require a display unlock or any additional cost for/from the display. You will need a one-time RTK unlock for the GPS receiver. In the picture below, see InCommand’s user-friendly interface that allows you to easily select your stream and other NTRIP settings.

The BR1-mini data plans are activated through Data Activation Center. The BR1-mini (or other cellular hotspots) can be added to existing cellular plans from Verizon, US Cellular or AT&T.

Our current GPS 7500 connects to the display and receives NTRIP data over a serial port. The 7500 then uses that information to calculate an RTK position. 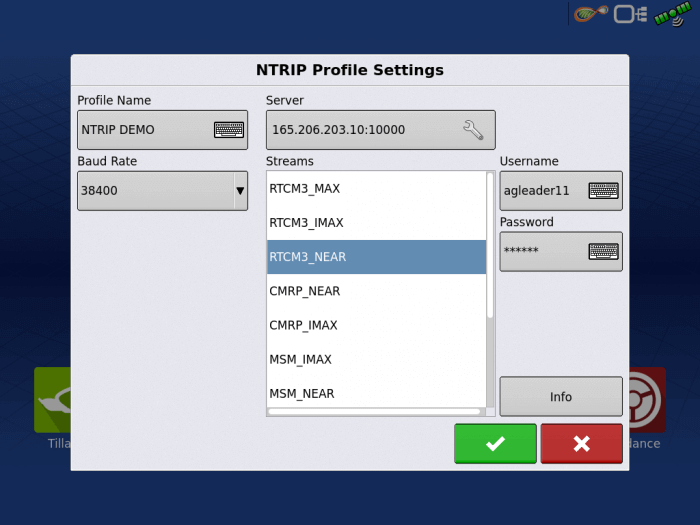