Agritechnica is the foremost fair in the world for Agricultural Innovations. As you might expect, precision farming features heavily and it is for this reason Ag Leader chose to launch its all new InCommand™ displays and AgFiniti® Mobile App.

Ag Leader had a dominant place in the hall for precision farming, being one of the total of 2,907 exhibitors, of which some 1,627 came from outside of Germany.

Ag Leader showcased the 2015 leading innovative agricultural technology in precision farming award.
Ag Leader again proved reputation for innovation and a source of inspiration for agriculture around the globe.
The hot topic at the Ag Leader booth and in hall 15 generally were the new InCommand displays. These new, state of the art, most modern and complete displays available on the market today caused a high level of positive interest. Visitors and competition alike were impressed by the leap forward Ag Leader has taken again.

Ag Leader exhibited the ISO Liquid Control module by highlighting the possible 36 sections, connected to a GPS simulator. A real spray boom was exposed with active light indicating the nozzles status.
The OptRx® crop sensor was demonstrated on top of a turning table, covered with grass. A Bogballe ISOBUS spreader showed in action the modulation of spreading, based on the data the OptRx recorded from the turning grass field.
Also an OptRx sensor was mounted under a drone, showing that also this modern application is possible, including the easy processing of all recorded data in SMS™ software.

Once again, Agritechnica 2015 has impressively cemented its lead position as the benchmark international trade fair for agricultural machinery and farming. With some 2,907 exhibitors and around 450,000 visitors – including more than 100,000 from overseas, Agritechnica has matched its figures from 2013.

The mood at the stand was even much more upbeat than expected – as reflected in the high demand of showing all the features of the new displays. First orders of the newly launched products were taken on the booth. 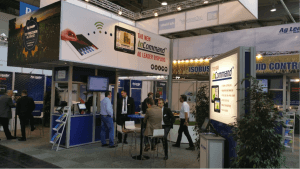 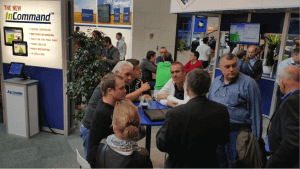 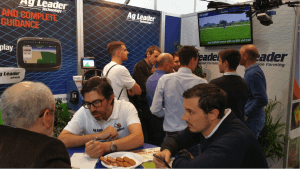 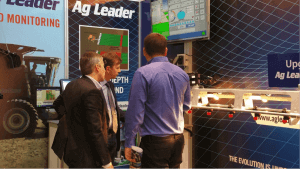