Some farmers enter into precision agriculture with a single tool, function or outcome in mind. David Taylor started with more lofty ambitions, and it’s driven his technology adoption ever since. 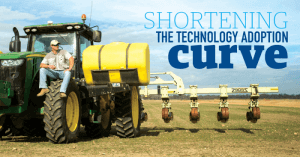 Taylor’s initial goal 11 years ago was to create a network of tools and software that would collect data from every field operation on his farm near Como, Mississippi. He wanted to collect easy-to-navigate, actionable data that he could leverage in making decisions to improve the efficiency and overall output of his family’s 5,500-acre corn, soybean, cotton and peanut farm.

“The more I know, the more I realize I don’t know,” Taylor says. “Just when I think I’m going to figure something out, I lose it.”

“I’m trying to be realistic about what is going to have ROI and what’s just going to end up being a toy,” Taylor says. “I want to be able to show that this stuff is paying for itself and that it’s making us money.”

In researching precision tools he felt were necessary to his farm’s future, he landed on Ag Leader as his provider, beginning with a yield monitor and guidance system and later adding more precise grid mapping to help him maximize crop input efficiency.

“We do a lot of grid soil testing, variable-rate applications and in-soil variable-rate nitrogen applications,” he says. “I realized I needed to focus not just on these specific functions, but do a better job of collecting and archiving all of this data. The more data I have and the more precise it is, the better off I will be.”

Taylor recognizes that not all farmers are as quick to make precision agriculture a major part of their operation. That’s why he’s taken a cooperative approach in working with other farmers to first help educate them on technology and help them learn how to best begin to utilize it on their own farms. Here are a few points he considers in that process.

In general, Taylor says any farmer who’s hesitant to begin working with precision ag tools should first identify the tools they need, then through the identification of the right support system of service providers, grow his or her comfort level over time. It takes time to make precision ag systems work best.

“Good, unbiased advisors are important. If you see value in this technology, you can start using it immediately, but it takes patience and confidence,” Taylor says. “If you’ve made an extra $100 per acre, you will be looking forward to the next wave of technology.”