In this two-part blog series, I sit down with Russ Mormon, master of the ag tradeshow, and all things Ag Leader. Russ started with Ag Leader right out of college and has been here 20 years as of this month! Many of you know him and well, you’ll probably agree – to call him an interesting character is a bit of an understatement!

Russ is a beloved member of our team because he is always willing to help out where needed, has a great attitude and no matter where you’re at, he always knows where to find a killer restaurant. 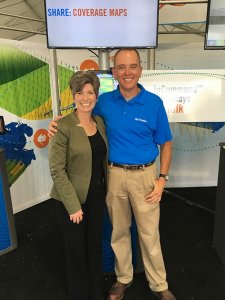 Ag Leader: How many trade shows did you attend the first year?

RM: I started in May of 1997 and attended three shows that year. My first trip was to Regina, SK to the “Western Canadian Farm Progress Show” and I think the next one was Farm Progress. The last one that year was the Greater Peoria Farm Show – Al and I did it that year, I recall we had a prototype PF3000 monitor there. 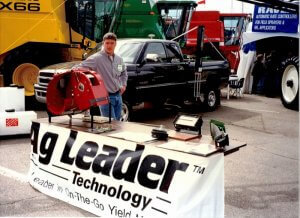 Ag Leader: Back then, what was the average booth space and who worked the shows? 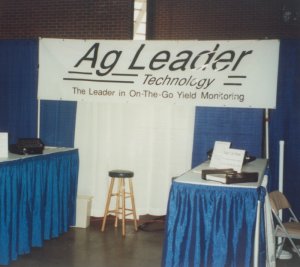 Ag Leader: How many attendees knew about precision farming in the early years?

RM: Not nearly as many as now… Precision Ag, when I started, was primarily yield monitoring. And MANY of those didn’t even have a GPS to map the yields.

Ag Leader: When did the trend start to shift towards more acceptance in the marketplace?

RM: About the time I started in 1997, things began to pick up. And then more recently there was a dip in the ag market, thanks to commodity prices. Things are trending back upwards, though I feel.

Ag Leader: Roughly how many shows does Ag Leader have a corporate attendance throughout the world now?

RM: I can speak only for North America because our international offices handle their own show schedules but 30-40 corporate shows/year in North America, at least.

That concludes the first segment, you’ll want to stay tuned for part two where Russ shares some of his fondest memories from the road. In the meantime, be sure to check out our tradeshow schedule where you can find us next!