As the growing season winds down, we are starting to look forward to harvest at our farm. Through the year we have been watching the fields turn from last year’s bean stubble, to a green hue, leaves in the wind, tassels, and now grain fill. 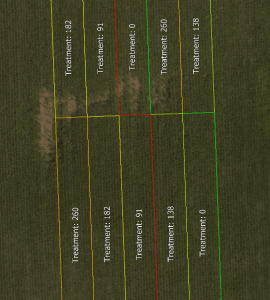 The fertilizer trials that we put out in our farm last spring, and the weather that we had during the year are going to make for some interesting results this fall. While I didn’t get an update through the early growing season, I wanted to share an image to show the importance of doing multiple replications, and multiple sites to ensure that you have data to support your future decisions.

For those that don’t remember see my Twitter post from April. In recent years have been banding starter fertilizer ahead of the planter, and we come back using Ag Leader InCommand and SteerCommand to plant on or near those bands. We have seen a positive response over the years, but this year, I wanted to fine-tune my rates, and set out to leverage the new Field Trials tools in SMS Advanced to see what rates really created the best return on investment. I created a trail that had five different rates, and I replicated those treatments four times in one field and three times in another field. 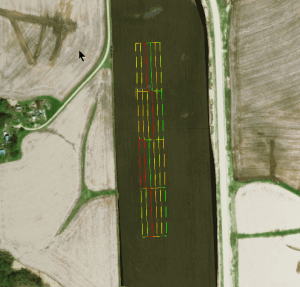 This summer, Ag Leaders Field Agronomist, Barry Anderson, was able to use a drone to capture the fields where the trials were planted to see how things compared beyond what was able to be seen from the ground. I placed the trials in 2 fields, and I’m very glad that I did. With the application of fertilizer in the April we didn’t know what spring was going to look like ahead, and I knew that there was a spot in the field, that if we get a really wet spring, can sometimes be affected with poor crop performance. I placed it there anyway as that was the best location that I was going to get for the number of replications that I was wanting to apply. As it turns out, the drone image showed the problem that I created for myself. You can see in the image that there is a drowned out spot that impacted several of the treatments, and so we will have to see if I can use these replications this year or not.  My best guess is that I’ll need to discard at least 1 of these replications, but we’ll see what it looks like when we get there with the combine.

Hopefully it isn’t covered in two feet of snow at harvest the way this season is going!

Share This
We use cookies to ensure that we give you the best experience on our website. If you continue to use this site we will assume that you are happy with it.Ok