We all know that soil types and conditions can pose many challenges to planting. Too cold, too wet, too hard, too clumpy, etc. Due to all this variability, it is crucial you are spending time behind the planter to determine the proper seed depth based on the current conditions. This is important to do each day and for each field. 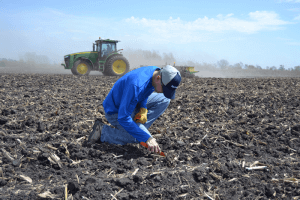 When working with a down force system there are three different situations that may occur. They are:

In the pictures below, can you spot the issue? Is there one? 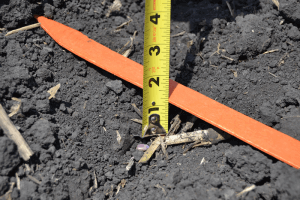 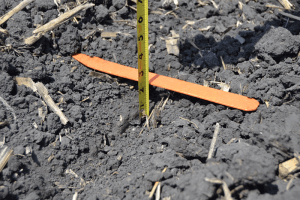 Optimum down force is shown above with seed depth at 2 inches for current soil conditions. Automatic control of down force generates enough force to: 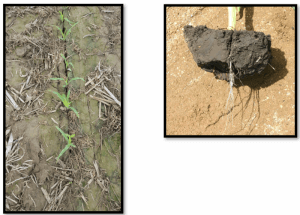 Shown above, excessive down force during planting can result in lodging, poor root development, varying or lack of plant emergence, as well as lack of soil moisture. “Hatchet roots” is another term used when roots cannot grow out into the soil to take up water and nutrients. 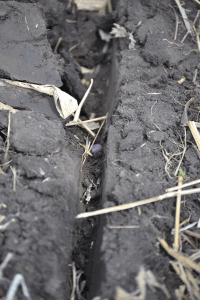 In the picture shown above the seeding depth is correct; however, there is a concern with residue in the seed furrow. To have optimum germination, the seed needs to have good seed-to-soil contact. If residue interferes, it may create a void, which prevents the seed from making good soil contact and results in uneven emergence. As residues decompose, autotoxic compounds slow growth and reduce the vigor of young corn plants. With early planted corn, excessive residue can lower soil temperatures below the optimal 50°F recommended for planting. Residue can also harbor diseases that survive on surface corn residue, especially anthracnose seedling blight.

In summary, one of the first results typically noticed when using a down force system in a field with highly varying conditions or soil types is the uniform plant emergence. Going from a soft, sandy soil type to hard clay areas of a field can negatively affect the planting depth, and the ability to quickly and accurately adjust the down force in these scenarios gives the planted seed a chance to yield to its full potential. If the seed is planted at the incorrect depth or into a compacted trench, yield potential is compromised before the seed even starts to grow.

In case you missed it, Ag Leader has announced a new hydraulic down force system with uplift, SureForce. Check it out!