What conditions will you face during spring planting? With 2019’s extreme weather patterns, what comes next is anyone’s guess. That’s why it’s smart to prepare now.

Planting into wet soil is completely different from planting into dry, compacted soil. Yet the fundamental challenge is the same—putting seeds in the right place, at the right time, and at the right depth for a uniform stand. Rough planting conditions and a high volume of residue can also pose difficulties. Rough planting conditions cause the row units to bounce, resulting in misplaced seed. Perhaps a greater challenge, though, is maintaining ideal planting depth when there are varying amounts of crop residue lying on the surface of the soil.

Growers are increasingly looking at tools that perform in various types of conditions. One of the most versatile solutions is hydraulic downforce technology. 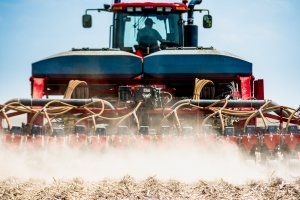 Many farmers in the United States experienced devastating flooding and storms during the 2019 growing season, with 19.4 million prevented plant acres (USDA).

“Nearly everyone is familiar with planting into wet conditions. As farmers, we all know we shouldn’t do this, but often we’re left with no choice,” says Ag Leader’s Field Sales Specialist, Brett Buehler.

While ideally farmers can wait until the ground has warmed up and dried out sufficiently, it doesn’t always happen that way. Certain hydraulic downforce systems allow users to minimize their gauge wheel load—to as little as 50 pounds—helping farmers plant into wet conditions without compacting the soil.

“If you’re one of the many farmers who planted late and harvested late, were you able to finish any planned fall tillage work?” asks Buehler. Harvesting after the ground is frozen, which many farmers were forced to do, often rules out fall tillage.

“Planting conditions may be different than expected and often rough when fall tillage work hasn’t been completed,” he says. “Rough planting conditions negatively affect seed placement, both in spacing and depth.”

Rough planting conditions can create vibration and up-and-down movement in the row unit, causing the meter to singulate seed at less than its capability. The vibration also interferes with accurate seed spacing in the trench. When seed isn’t placed accurately in the trench, plants can be too close together or too far apart, both of which result in reduced yields.

Wet planting conditions are more commonly blamed for planting mishaps, but planting in extremely dry soil can also negatively impact planting success. Dry soil isn’t as susceptible to damage by compaction, but it’s difficult to form a good seed trench that holds together.

Josh Payne, who farms near Concordia, Mo., uses hydraulic downforce for a variety of reasons. On his farm, drought is typically a bigger problem than excess moisture.

“A couple of years ago, we had conditions that were so dry and hard that we struggled to get our double disc openers into the ground.,” Payne says. “With dry planting conditions, it helps to have the ability to add extra down pressure.”

Payne has found that Ag Leader’s SureForce hydraulic downforce technology delivers the power to do the job right. 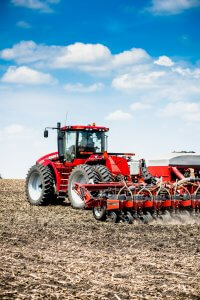 For the last seven years, Payne has used cover crops extensively on his farm as part of his soil health system.

“We plant into green cover crops,” Payne says. “We’re planting usually into four-to- six-inch tall rye when we plant corn, and we’re planting soybeans into five-or-six-foot tall cereal rye. When planting into cover crops, it takes a lot of force for the planter to make it all the way through the crop and into the soil to place the seeds at proper depth.”

Hydraulic downforce helps Payne plant into the green crops and the bed of crop residue from prior years.  “Before using SureForce, we had down-pressure springs,” Payne says. “But we have thousands of pounds of biomass and the volume can vary greatly on different acres.”

“Ag Leader developed SureForce to offer the widest range of downforce on the market today—with 350 pounds of lift and 650 pounds of downforce,” says Buehler. “That’s 1,000 pounds of available adjustment.”

“When planting into heavy cover crops, such as Payne does, the row units require a high amount of force to ensure the ground-engaging components work correctly. SureForce uses a hydraulic cylinder to adjust downforce five times per second.”

“The amount of force needed to do the job right is often not achievable with other downforce options,” he adds.

“The ability of SureForce to adapt and change in different places, based on what our conditions are, that’s pretty much a lifesaver,” Payne says. The end result is consistent depth and an excellent stand.

In addition, Buehler explains, when achieving proper depth is a challenge, SureForce performs.

“By monitoring the load on each gauge wheel 200 times per second, SureForce can identify whether the row unit ever begins to plant shallow, in which case pressure is increased as necessary, according to each individual row’s specific needs,” Buehler says.

“We’ve encountered some pretty extreme cropping systems, where 400 to 500 pounds of downforce just isn’t enough, Buehler adds.” “These include systems such as no-till, double cropping, or planting into a standing cover crop”

“With these farming practices becoming more prevalent, SureForce is capable of meeting these extreme downforce requirements and maximizes yield for any planting conditions,” he says.