On The Road With Travis Green, Northeast US Ag Leader Representative

My role as Northeast Territory manager allows me to meet some interesting, intelligent ag professionals and view some of natures’ most beautiful works.

Several times a year I make one of my favorite trips through New York’s “North Country” and the Champlain Valley in Vermont. My alarm buzzed on Tuesday morning at 4:45 AM, and within a few minutes I was strapped into the Ag Leader sponsored F-150 for a three day, 1,250 mile trip.

First stop was a meeting at 12:30pm with Brent at Bourdeau Brothers’ Canton, NY facility. Bourdeau Brothers use several Ag Leader systems in their custom application fleet. Brent and I were meeting to discuss some questions he had about an Ag Leader OptRx® system on his CaseIH Patriot 3330. He also reviewed a unique test plot that will compare nitrogen rates and yield from OptRx, a nitrogen model, and the farmer’s suggested rate. OptRx and the nitrogen model both recommended approximately 27 gallons per acre, while the farmer rate was 20 GPA. We’re awaiting harvest data to determine which rate was the optimum for this field.

After my visit with Brent, I made a 2 hour trek to visit Andre at Bourdeau Brothers’ Champlain, NY location. Andre is a man of many talents and we talked about some projects in his diesel repair shop that includes several tractor engine rebuilds and his weekend toy, a John Deere 6030 pulling tractor with a stroked 619 engine. After that conversation we took a 30 minute ride to see some 600+ acre fields and meet with a customer who could benefit from Ag Leader’s ISOBUS Hydraulic Down Force system on a 24 row John Deere planter. I parted ways with Andre around 6:30 and continued on for another 1.5 hour drive to Burlington, Vermont where a warm dinner and soft bed was calling my name!

I met new Ag Leader dealer Scott Magnan around 7AM for breakfast and several customer visits. Our first destination was a dairy farm that is using an Ag Leader InCommand™ 800 to record liquid manure applications with a dragline and injection system. From there we headed north to visit another dairy farmer who needed advice on improving the performance of his John Deere 7000 6 row planter that is setup for no-till. I literally felt at home during this conversation because our family converted to 100% no-till on our own farm 11 years ago with a similar planter. The conversation went from down pressure to turn compensation to a 20 minute ride on a UTV to evaluate population on contours. The result was a variable stand count from 32K to 54K, and a close encounter with a flock of turkeys! 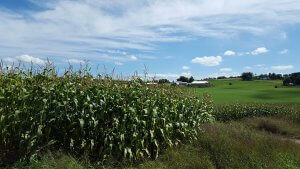 Wednesday PM took me further south to meet Jonathan of Bourdeau Brothers’ Middlebury, Vermont facility. Dairy is the centerpiece of the ag economy in Addison County. Jonathan and I visited several dairies that are using Ag Leader SeedCommand™ and steering products. The soils in this region vary from sand to heavy clay and all Hydraulic Down Force customers are pleased with its performance in this challenging environment. 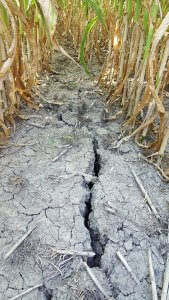 We also took a chance to do some sightseeing. The Adirondack Mountains provide an awesome backdrop for Lake Champlain. 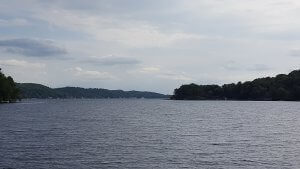 Corn silage harvest had evidently started for some local farmers, as some errant silage decorated the Chimney Point Bridge that connects NY and VT across Lake Champlain. 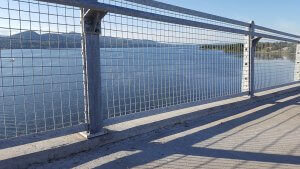 It was “all hands on deck” Thursday morning at Bourdeau’s Middlebury location in preparation for the annual Addison County Ag Showcase. 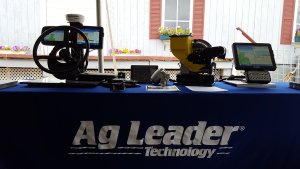 This is a favorite event of mine,  as over 400 attendees were served a delicious chicken barbeque dinner by owner Germain Bourdeau and his staff. 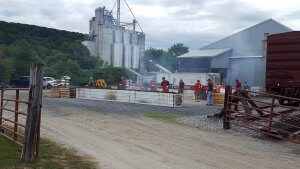 And what meal in dairy country would be complete without ice cream? The Ag Showcase crowd started to dwindle around 2PM. Jonathan and I were able to squeeze in a quick planning meeting to promote Ag Leader’s yield mapping system for CLAAS Jaguar forage harvesters. 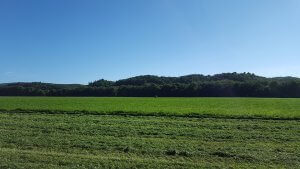 After packing up my show gear, it was time to start the eight hour trek back to the family and farm in Gettysburg.  I considered spending the night somewhere in NY or PA, but the desire to see my children before they left for school on Friday pushed me onward. One exploratory detour down Floating Bridge Road, two NASCAR style pit stops, and several minor delays at construction zones later, I found myself in winner’s circle around 11:00 pm. 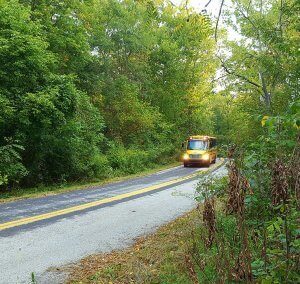 The week was a success. I shared knowledge with great people in ag, viewed awesome scenery and represented the top precision ag brand at a favorite dealer event. Next week I’ll head south to North Carolina to harvest a replicated plot at NC State that will reveal the yield difference between 1996’s ground drive and spring down pressure and 2016’s SureDrive and Individual Row Hydraulic Down Force. Stay tuned!