If you’re using SureForce™, or considering adding it to your planter, you are likely curious about how it works in order to maximize its potential. By focusing on agronomic principles for the crop being planted and having a working knowledge of how SureForce™ behaves, we can ensure that the crop has a high potential for prompt and uniform emergence.

There are two influencers for applied force, the row unit and field conditions. Thinking about downforce in this way can help operators identify potential problems and gain a deeper understanding of information shown on the InCommand® 1200 display as applied force is automatically controlled. Typically the row unit will be unchanging throughout a planting season, whereas field conditions change seasonally and spatially. 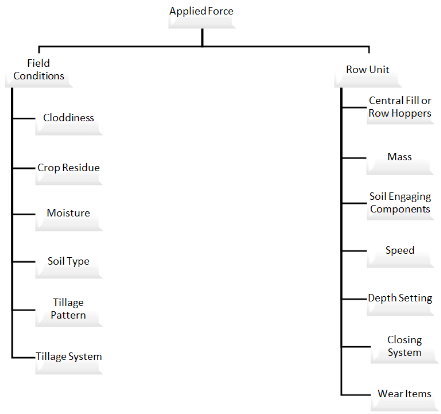 Chart showing all the influencers on applied force (up or down)

SureForce is an active planter row unit force system that uses Gauge Wheel Load Sensors on each row to sense and respond according to changing planting conditions. Gauge Wheel Load is defined as the force being measured on the gauge wheels at any point during planting. Gauge wheel load is needed to achieve and maintain target depth at all times. SureForce acts to automatically apply force when gauge wheel load is insufficient or in excess as compared to the target setting.

In the display, the default setting is Medium and is recommended as a starting point for all planters, field conditions, and crops.

After the operator has spent the time to gain an understanding of all forces impacting the row unit during planting, gauge wheel load settings can serve as a valuable tool for fine-tuning the system.

Choosing to operate SureForce in a specific automatic control setting other than default and/or manually based on an arbitrarily determined applied force or gauge wheel load target is not advised.

Consult with a trusted agronomic advisor to gain an understanding of the impact of seed depth and sidewall compaction to the crop being planted. Set target depth and begin planting in Medium. The objective is to achieve and maintain target seed depth at all times without inhibiting root development from over compaction of the seed trench. 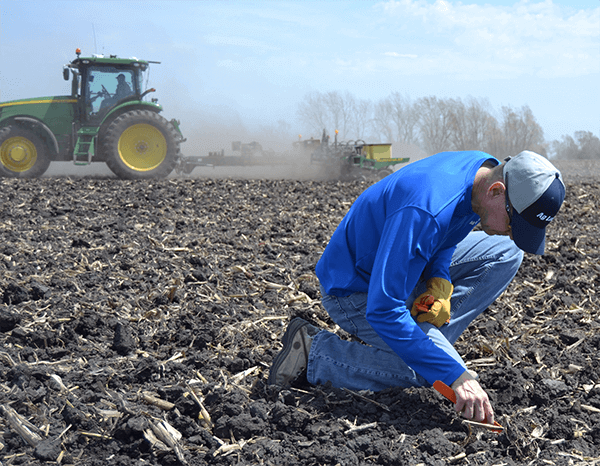 Using the applied force maps on InCommand 1200, check for depth loss in areas of the field with the lowest and highest values of applied force. If depth is being routinely lost, consider moving to a higher setting.

Using the applied force maps on InCommand 1200, check for compaction in areas of the field with the lowest and highest values of applied force. If compaction is being routinely observed, consider moving to a lower setting.

When might I expect to use a setting other than the default (Medium)?

Typically it is not one factor but rather a combination of these factors.

Interested in learning more about SureForce? Talk to your local Ag Leader dealer!