Technology on the Farm: Howell Update

Lora Howell of Howell Farms, Danville, OH was our 2017 Tech My Farm contest winner. Let’s revisit her to see how technology has helped her farming operation.

When Howell was announced as the 2017 Tech My Farm contest winner, she wasn’t a complete stranger to precision agriculture technology. But with room to grow her technology know-how and adoption, she consulted with a local Ag Leader dealer to determine how an arsenal of new tools could help her meet needs specific to her farm. Howell began working with Evan Watson, an Ag Technology Specialist with Precision Agri Services Inc., located in Minster, Ohio, to find the right Ag Leader tools to meet her goals. Her 500-acre farm has a wide variety of terrain with rolling hills and smaller, irregularly shaped fields. She’s seen yields vary across her farm, which she suspects has been caused by inconsistent soil drainage, nutrient distribution, and seed placement. 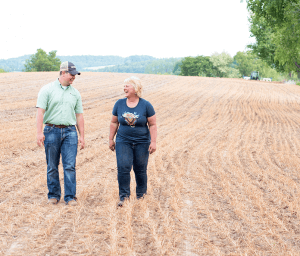 “I thought of the things that would give her the most benefit – the biggest bang for her buck – with this technology,” Watson said. “She makes all the decisions on her farm and is really running the show, and I thought in terms of what technology she could incorporate to really help her bottom line.” 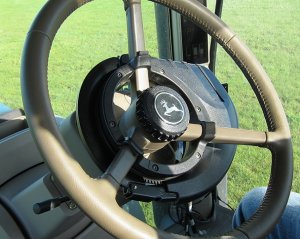 The first tool Howell integrated into her farm was the OnTrac3™ Automated Steering System to provide in-field guidance along with a GPS 6500 receiver. Since the system can be moved to multiple pieces of equipment, the system helps her coordinate all field operations. Though this doesn’t necessarily address a specific need on her farm, Watson said the system would help create new efficiencies for Howell. “It’s set up in her planting tractor, but she will have the ability to move it to others,” he said. “It is a huge step up from the basic guidance she had before.” 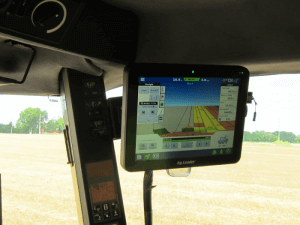 The InCommand® 1200 display and yield monitor offers Howell the opportunity to better manage some conditions specific to her farm and do so with ease. “It’s beautiful. The past screens I’d used were brown, with brown backgrounds and brown lettering,” she said. “The InCommand unit has a big screen and it’s very vibrant with color hues that are friendly to the eye.”
Because of the variability in her landscape, it’s also easy for fertilizer applications to end up inconsistent. Additionally, water management caused variability in yields from one end of a field to the other. Watson knew the InCommand display would help her better manage these issues for a more consistent yield potential.
“The yield monitor is going to help her make better management decisions with variety tracking, fertilizer applications and potentially guiding where she needs to put in new drainage tile,” Watson said. “There are likely areas of her fields where we have thought she put on the right amount of fertilizer, but now she can make adjustments based on her yield maps that can back up the soil testing she does. She may even move into variable-rate fertilizer and herbicide applications down the road.”
Howell said she’ll be able to make decisions like these more quickly and efficiently. “I’ll be able to see in vivid colors
where my crop’s performing and where it needs work,” she said.

The next tool Watson recommended for Howell was the SureStop® electric clutch system for her planter. Because her farm mostly comprises of smaller, oddly shaped fields, planting with traditional systems typically leads to either over-seeding or gaps. With the SureStop clutches, she will be able to plant consistently and efficiently by leveraging the system’s row-by-row seed placement control.
“She has a lot of smaller fields and rolling ground, and with the section control these clutches will provide on her planter, she will see a significant payback,” Watson said. “It’s an affordable package and has the biggest payback potential by eliminating point rows and overpopulation, both of which reduce yields. It represents significant seed savings on her operation.” 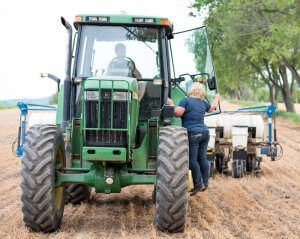 Because of the characteristics of Howell’s land, GPS signal can sometimes be an issue. Hillsides and tree lines sometimes make it difficult to sustain a GPS signal, which can cause gaps in data gathering. Howell added a GPS 6500 receiver that offers her better accuracy with exclusive technology to improve signal uptime. “Having the improved capability that the GPS 6500 offers is crucial for Lora because of the rolling terrain and tree lines along the fields that she farms,” Watson said. “It also gives her the ability, if she wants to pursue a higher-level signal later on, to add RTK to get higher accuracy moving forward. We thought this would be a good way to solve her immediate problem.” Howell said she’s prone to planting “crooked rows,” so she anticipates that the GPS, automatic row shutoffs and her SteerCommand® autosteer system will help make her planting operations easier and more efficient.

“I have an eight-row planter, so didn’t think too much of it until I learned what automatic shutoffs will do for me, especially in point rows. I won’t have as many problems,” she said. “I don’t care if you have row markers. This whole autosteer and GPS system is going to make life so much easier.”

Howell’s new tools will offer more than crop yield and efficiency benefits; she sees them helping lower her overall stress level. “Systems like autosteer and GPS are going to make life so much easier,” Howell said.

This article originally appeared in the Summer 2018 edition of Insights magazine. The complete publication can be found here.