THE EVOLUTION OF FARM DATA – Part I

Ag Leader reflects on the early days of precision agriculture and spotlights key innovations that have made collecting, protecting, sharing and utilizing data easier and more efficient over the past 25 years 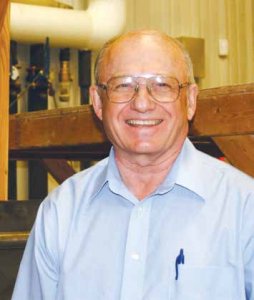 Ag Leader entered the agriculture equipment market with the world’s first widely adopted yield monitor. Unbeknownst at the time, that yield monitor started a data revolution and the beginning of the precision farming industry.

It began in 1986 in founder Al Myers’ basement. “I had been brainstorming a lot of product concepts and kept spiral notebooks of ideas,” said Myers. “After carefully weighing the pros and cons of every idea, I decided there was one that stood out to me as the one that was undoubtedly going to happen and that every farmer would want: the on-the-go yield monitor.”

After six years of development and six generations of prototypes, Myers was ready to go to market with his first product in 1992: the Yield Monitor 2000.
Myers sold just 10 yield monitors that first year but it was enough to convince him that farmers sought the ability to collect accurate field data in order to make better farm management decisions. This conclusion was validated over the next few years as sales of the Yield Monitor 2000 jumped to over 1,500 units per year. 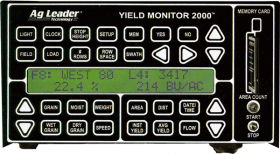 Early on, Al Myers tested his invention, formally known as the Yield Monitor 2000, on his family farm in Illinois, but also recruited a handful of early adopters that were ready for harvest data. One of which was Dennis Friest, still an Ag Leader customer today.

It was the early 1990s and Dennis Friest was on the hunt for technology capable of providing real-time yield data. The first system he purchased placed sensors on the auger of his grain cart in order to collect yield data. It was a step in the right direction, though it didn’t deliver the real-time, in-cab data that he wanted. Then in 1993 he came across a product from an upstart company called Ag Leader Technology.

“The serial number of my first Yield Monitor 2000 was number 15, and my first tech support person was Al Myers himself,” said Friest, who farms with his son Brent near Radcliffe, Iowa. “I have always had a desire to keep track of my yields. When I started test plotting different varieties, and weighing them across the field, this technology was something I knew would help me a lot.”

Today, Friest continues to utilize Ag Leader precision tools to collect data to improve efficiency, profitability and environmental stewardship. “Having this data helps me to be a better environmentalist and also a better economist. So we value any tools that can help us gather data to make better decisions.” 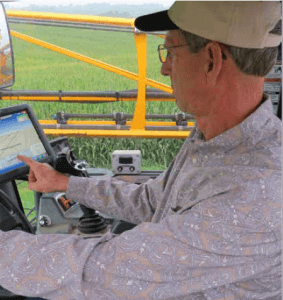 Don Vos started using his first Ag Leader yield monitor in the mid-1990s, though it was when he added GPS and mapping in 1997 that he realized how the field data he was collecting could really impact his operation.

“Once we figured out mapping, then it was all about the information. There was so much information there that we could use,” said Vos, who farms roughly 2,000 acres of corn and soybeans in southeast Iowa.

“We probably gathered about three years of information before we started making big decisions. Then we started testing things on 50 to 70 acres at a time.” Variable rate fertilizer, planter speed, auto-steering, variable rate seeding, applying nutrients based on crop sensing and managing planting depth using hydraulic down force were just some of the technologies Vos experimented with as they became available. 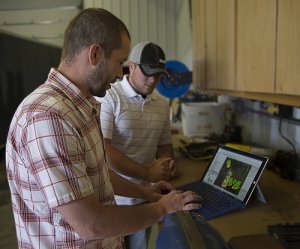 With all this data, Ag Leader quickly realized farmers needed a robust, but user-friendly way to analyze it. And so SMS was born. Today, SMS Software is a widely used platform for in-depth data analysis by both farmers and crop consultants. It takes a lot of data to maximize profitability across 6,000 acres. So for the past 20 years, Jeff Hodel has been using precision farming software to implement a site-specific, data-driven approach to managing his sizeable farm in central Illinois. This includes Ag Leader SMS software, which he implemented back in 2000.

“We use the software to compare yields with different applications and different practices to find out what makes money and what doesn’t,” Hodel said.

We’re just getting started. Come back next week for the second half of Ag Leader’s Data Evolution.

This is a exerpt from Insights Magazine. Like the story? Get your FREE subscription here!