Farmers apply Nitrogen fertilizer to their crops in various forms. One commonly used form of Nitrogen is Anhydrous Ammonia/NH3. Anhydrous Ammonia is an efficient N source (82-0-0) and exists as a gas at temperatures ~28 degrees Fahrenheit (-2.2 C) and greater. When stored above this temperature, the material must be kept under pressure so as to keep it in a usable liquid form for application on the farm.

As ambient temperature fluctuates, the pressure inside the tank will change. For safety reasons, anhydrous ammonia tanks are typically not filled to capacity.

When in a vapor state, anhydrous ammonia does not distribute evenly across the desired width of the application and can destroy costly components on the rate control system such as flow meters. The inconsistency in application results in adverse effects on yield as plants are potentially starved of the Nitrogen that was intended for them. Additionally, application of vapor results in the N rate being much lower than desired since density decreases when the product converts from liquid to gas. A certain portion of vapor exists in all tanks and can mistakenly be applied. Because temperature affects the pressure in a closed system, changes in temperature during operation increases risk of applying vapor.

How Ag Leader addresses the challenge

For example, with pressure and temperature sensors, DirectCommand continuously monitors the physical state of the anhydrous ammonia during application. If the likelihood of vapor is high based on the sensor readings, the operator is alerted by a red ring present on the on-screen pressure gauge. This alerts the operator prior to the presence of vapor to ensure that the anhydrous ammonia stays in liquid form. so that it is applied evenly and effectively to nourish the upcoming crop’s N needs.

The presence of vapor can also be an indicator of a low tank. In the image below, you can see the map screen gauge where the green range represents liquid state and red is vapor state. 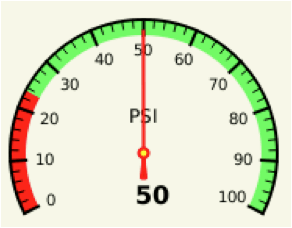