InCommand 1200: A window into your planter, part II

In the second installment of this blog I will share specific examples where InCommand identified issues that could cost yield. It’s all pretty common knowledge that proper seed spacing and uniform emergence equates to more bushels in the bin but how do you know you’re planting properly?

Enter the InCommand™ 1200. It has the resolution to clearly show everything you need to know. Historical pass-to-pass information with directional arrows, split screen so you can delve into more specific information, have planting maps in hand when you leave the cab with AgFiniti® Mobile and much more.

Avoid costly mistakes
Fun Fact: Using row-by-row planting data from the InCommand™ 1200, 80% of our first-year participants were able to uncover problems they never knew they had.

For example, one participant had a population set at 36,000 for his field and noticed the left side of the planter was under-planting and the right side of the planter was planting as expected. He started troubleshooting. It was not a vacuum issue and the encoders on the hydraulic drives checked out fine. Digging deeper, he out he forgot to update the gear ratio setting on the second hydraulic drive. Agronomic issues like this typically would have easily been overlooked in the past. 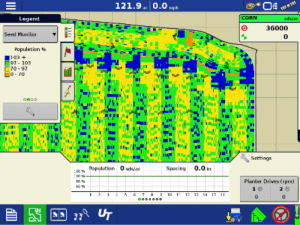 Another participant was making his first few rounds with the new InCommand and SureDrive system when I took the screen shot below showing poor singulation on rows 12 and 16. An investigation into those 2 rows found that he had installed the seed delivery belt backward. He said they must have been this way for years and he had never noticed before he had the visibility that InCommand provides. 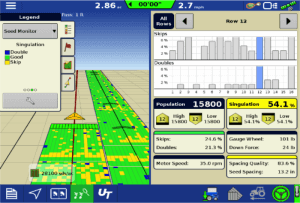